THE ORIGINS OF ARMWRESTLING

ARM WRESTLING IN A NUTSHELL

Arm wrestling is a sport in which two opponents, positioned opposite each other and each with an elbow on a stable surface, grasp the other’s hand and attempt to push the opponent’s arm down to the surface. Competitive arm wrestling may be performed in either a standing or sitting position, and players may participate in both right- and left-handed contests. Played both casually and competitively, arm wrestling, also known as wristwrestling or arm sports, has roots that began in antiquity and continue today.

Arm wrestling originated at least 4,000 years ago with the discovery of what appears to be an arm wrestling contest painted on an Egyptian tomb, according to the Ultimate Arm Wrestling League. In modern times in the United States, arm wrestling developed from a variation of a Native American game in which competitors used their arms, legs or whole bodies to unbalance or pin all or part of their opponent's body. Practiced as a sport by high school and college students, arm wrestling was also a popular tavern game in the first half of the 20th century

In 1952, journalist Bill Soberanes organized the first recorded arm-wrestling competition at Gilardi’s Saloon in Petaluma, Calif. As the contest grew in popularity, it represented first Petaluma, then northern California, and finally the entire state of California in arm wrestling. After 10 years, the tournament expanded and relocated to one of the largest auditoriums in Petulama.

When Soberanes, together with Dave Devoto, moved the arm-wrestling contest to the new venue in 1962, he officially named it the World Wristwrestling Championship. Adding to the tournament’s popularity was a series of comic strips created by cartoonist Charles Schultz in 1968.

In the 11-part series, Snoopy the dog travels to Petaluma to participate in the World Wristwrestling Championship; he is ultimately disqualified as he lacks the thumbs required to compete. The comic strip ran in dozens of languages throughout the world, states armwrestling.com, the official website of the United States Armwrestling Federation.

In 1969, Devoto spearheaded efforts to include the World Wristwrestling Championship as part of ABC’s Wide World of Sports, and the tournament appeared annually on the program for the following 16 years. During this time, the American Armsport Association came into being, representing more than 56 arm-wrestling groups across the United States.

In the early 1990s, the U.S., Canada, India and Brazil joined together to create the World ArmSport Federation, and, in 1992, the organization hosted its first worldwide annual championship tournament in Switzerland.

Today, men and women from more than 70 member countries, including the U.S. represented by the American Armsport Association, compete for the title of world champion. In addition, the World Wristwrestling Championship, now titled the World Wristwrestling-Armwrestling Championship, continues to hold its annual competition on the second Saturday of October in Petaluma.- Source: www.livestrong.com

ARM WRESTLING IN THE MODERN ERA

Arm wrestling, also known as Bras de fer, is a type of wrestling (a combat sport) with two participants. Each participant places one arm (either the right or left, but both must be the same) on a surface with their elbows bent and touching the surface, and they grip each other's hand. The goal is to pin the other's arm onto the surface, with the winner's arm over the loser's arm.

Various factors can play a part in one's success in arm wrestling. Technique and overall arm strength are the two greatest contributing factors to winning an arm wrestling match. Other factors such as the length of an arm wrestler's arm, his/her muscle and arm mass/density, hand grip size, wrist endurance and flexibility, reaction time, as well as countless other traits, can add to the advantages of one arm wrestler over another. It is sometimes used to prove who is stronger between two or more people. In competitive arm wrestling, as sanctioned by the United States Armwrestling Federation (USAF), arm wrestling is performed with both competitors standing up with their arms placed on a tournament arm wrestling table. Arm wrestling tournaments are also divided into weight classes as well as left and right-handed divisions. Furthermore, strict rules such as fouls given to penalties (such as the competitor's elbow leaving a matted area where the elbow is to remain at all times, or a false start), and trying to escape a possible arm pin by breaking the grip with the opponent may result in a loss at the table. Paraphrasing USAF rules, arm wrestlers must straighten their wrists without a time lapse of one minute during competition.

Some noted top arm wrestling competitors include John Brzenk (hailed as the greatest arm wrestler of all time), Zaur Tskhadadze, Alexey Voevoda and Jerry Cadorette. Allen Fisher is of high acclaim, for he has won 26 world championships. He is one of the oldest multiple world champion title holders in the sport of arm wrestling at 55 years of age in the year 2011. Heidi Andersson is a female armwrestler from Sweden who has won nine world championships between 1998 and 2011. John Brzenk is known mostly for his array of techniques which change almost every time he is engaged in competition, even with the same opponent within the same match. As of Summer 2008, John Brzenk is ranked #1 in North America. Ron Bath is known for his use of the Top Roll technique which emphasizes a 'roll' of the wrist as he brings the opponent's wrist down. Travis Bagent, like Brzenk, is known for his wide array of techniques, coupled with his massive strength and explosive style. Many of Bagent's matches have ended in seconds. However, Bagent is most well known for his colorful remarks and rather rude comments against his opponents. Bagent is considered the best left-handed arm wrestler in the world and is currently ranked second overall in North America, as of summer of 2008. 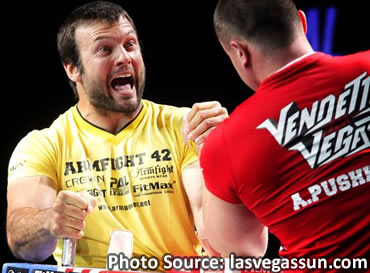 Other competitors such as Matt Girdner, Michael Selearis, Sean Madera, Marcio Barboza, Christian Binnie and Anthony Macaluso are known for their reliance on strength, coupled with the hook technique, where the wrist turns into a hooked grip after the referee has started the match. "The hook" or "hooking" is any move derived from the inside system of arm wrestling. The second generic system or style of Arm wrestling is known as outside arm wrestling "the top roll" or "top rolling", while the "tricep press", "shoulder pressing", or "shoulder rolling" is often described as the third generic system or style of arm wrestling. and certain arm wrestlers depend on the straps such as Jason Vale who won the 1997 Petaluma World Championships in the super heavy weight class at only 175 pounds using the strap technique.

Many arm wrestlers will have a signature style or favourite technique, while others have enjoyed success by becoming extremely well rounded. Within each of the three broad technical systems of arm wrestling there are numerous clearly identifiable techniques which have been developed and enhanced over time. Great Britain's most successful Armwrestler and former two time European and World Middleweight Champion Neil Pickup is one of today's leading Armwrestlers widely recognized as having originated and developed techniques to suit the genetic make up of individual Armwrestlers. Neil Pickup has enjoyed an Amateur and Professional career spanning more than 20 years during which time he has won more than 60 International titles across 5 different weight classes on both his right and left arms, while also training numerous World Champions both male and female. This success has been largely attributed to his technical prowess, experience and understanding of the athletes whole body as a lever. The Filipino version is called "Bunong Braso".

Associated injury
Arm wrestling puts enormous torque/twist on the upper arm's humerus bone to a degree seen in few other physical activities. Most people's bones are not accustomed to being significantly stressed in this direction, and injuries can occur. The arm typically fails because of a diagonal break at or below the midpoint between the shoulder and the elbow.